The first Apprentice Boys Club was formed on 1st August, 1714 (the date of the annual commemoration that year) by Colonel John Mitchelburne who had been Governor of the City towards the end of the Siege.

Although this Club ceased to exist after his death, the memory of the Siege was always celebrated each year in some form by informal groups right through the 18th century.

The first formal ‘Apprentice Boys of Derry Club’ was formed in 1814 by Benjamin J Darcus. Over the next 40 years or so, other Clubs were founded to commemorate the Siege heroes.

In 1859 six Clubs came together to form the Associated Clubs of the Apprentice Boys of Derry. 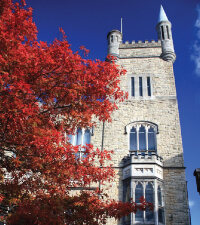 There are eight Parent Clubs based in the City of Londonderry, symbolising the regiments formed during the siege to defend the city.

The original six Clubs were the Walker, Mitcheburne, Baker, Murray and Williamite Clubs. The Williamite Club became extinct, but three new Clubs were founded called No Surrender, Browning and Campsie bringing the number of clubs to the current eight.

Each of the eight Clubs is based in Londonderry with a Parent Club meeting in the Apprentice Boys Memorial Hall. The Londonderry Clubs became known as Parent Clubs following the opening of Branch Clubs outside the city.

Any Club of the Association formed outside of Londonderry is called a Branch Club. Branch Clubs are an extension of one of the Clubs in Londonderry and take the name of their Parent Club eg. Lurgan Apprentice Boys of Derry Club or Edinburgh Campsie Club.

As the number of Branch Clubs grew they formed local committees to co-ordinate their activities and to represent their area’s opinions and interests at General Committee. These committees became known as Amalgamated Committees.